Nigerian actor, Williams Uchemba has shared his thoughts on the sad events that trailed #ENDSars protests few days ago. 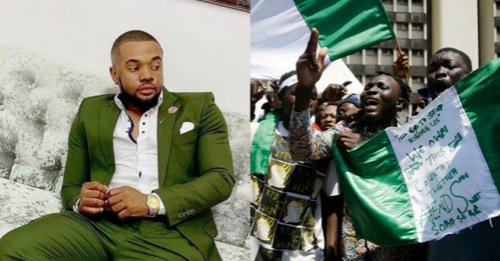 In a chat with Sunday Scoop, the actor opined that the demonstrations began to derail as some protesters turned it to a party at Toll gate. He also said the protests should have climaxed on the Friday the candlelight vigil was held and the next thing would have been to strategize to make sure the already-met demands be implemented.

He wrote, “It is about control. That is why you have brakes in your car. It is to know when to stop or slow down, and when to accelerate. At a point, the protests got out of control. They started doing parties at the toll gate. We were all asking for the same thing – basic amenities.

“I know, constitutionally, you cannot use curfews to stop a protest. But maybe, we could have tried to work with the government just for that day. There was peer pressure on most of my colleagues. I know some of them that were pressurised to go out on the streets, even when the government had given us airtime. The pressure was more from the fans.